As I’ve gotten better at creating Paradigm patterns and playing other people’s patterns, I’ve formed an opinion about what kinds of patterns are the most fun to play. I’ve identified two main types of patterns, which I’ll call logical patterns and visual patterns. Logical patterns tend to be math-based or logic-based, and often involve sequences, offsets, and counting. Many of them can be expressed as rules about how cells should be colored based on how other cells are colored. Visual patterns tend to be made up of shapes, lines, and paths, and they tend to look significantly less abstract.

In my experience, visual patterns are almost always more fun to play than logical ones. To explore this point further, let’s take a look at an example of each kind of pattern. 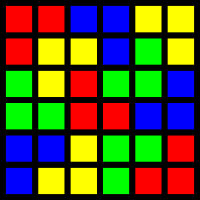 This pattern is made up of twelve interlocking “L-shapes” in four different colors. There are an equal number of L-shapes of each color, and no shape is touching another shape of its own color, even diagonally. 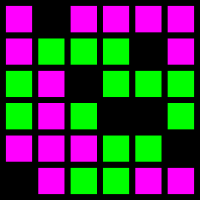 In this pattern, there are a number of black blocks scattered across a grid. (These blocks are not game-tiles that players need to guess—they’re visible when you first load the pattern.) The defining rule of this pattern is that if any tile has exactly one black-block neighbor (including diagonal neighbors), it’s purple; otherwise, it’s green.
Here are some reasons why I think that visual patterns are more fun to play than logical ones.

First of all, visual patterns tend to offer a better “reward schedule” than logical patterns do. When playing a visual pattern, you usually figure something out very quickly—and figuring things out is what makes Paradigm fun. Imagine that you’re playing the visual pattern displayed above. It won’t take you long to figure out that the pattern consists of “L-shapes”. And it feels good to figure that out.

Of course, there’s more to figure out after you’ve figured out that there are L-shapes—and that means you’ll continue to have fun as the game progresses. You’ll begin to look for higher-level patterns in the arrangement of the L-shapes. When you uncover a new red tile, you’ll “know” that there must be two more red tiles nearby, but you won’t necessarily know exactly where. This provides a good mix of knowledge and uncertainty. You won’t feel totally lost, but the answers won’t be obvious.

Notice that, even if you knew all of this pattern’s rules, you still wouldn’t necessarily be able to run the entire thing. Solving these patterns requires a healthy mix of induction, deduction, and odds-calculation. By applying all of the rules that you’ve been able to glean, you may be able to make some surprisingly accurate guesses. For instance, if you’ve figured out that there are exactly three L-shapes of each color, you may be able to deduce exactly where a certain unseen shape must lie.

Contrast all of this with the experience you’re likely to have while playing the logical pattern. You probably won’t figure anything out about that pattern right away. In fact, there’s really only one thing to figure out, and until you do, you’ll probably feel relatively lost. Furthermore, it will be difficult not to view the pattern as a collection of purple and green shapes, which will just lead you further astray. Very likely you’ll just keep uncovering tiles in relative confusion until the entire pattern has been revealed.

In fact, it’s possible that you won’t figure out the underlying rule of the pattern even at that point, and this suggests a general principle: if a pattern functions as a puzzle when it’s entirely revealed, it’s not a good Paradigm pattern. The reason should be obvious. If a pattern is at all difficult to figure out when it’s entirely revealed, it’s going to be much too difficult to figure out when it’s half-revealed. One reason that visual patterns make the best Paradigm patterns is that the point of a fully-revealed visual pattern is usually entirely obvious.

Here’s a final point about the distinction between these two types of patterns. Visual patterns are best solved through exploration, while logical patterns would be better solved through experimentation. For instance, if you were trying to solve the logical pattern displayed above, you might theorize that a black cell all by itself would be surrounded by a purple ring, but you have no way of setting up such an experiment. In contrast, the visual pattern displayed above doesn’t really suggest any experiments to try. It’s just a collection of shapes to explore. Logical patterns would mesh best with a game like Zendo, in which experimentation plays a key role. The basic mechanisms of Paradigm are exploratory, so the best Paradigm patterns are those that are fun to explore.