Why Did the Chicken…? 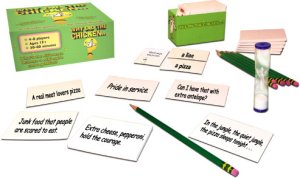 Why Did the Chicken…? is a party game about making up funny answers to randomly generated riddles. Play Again Games has published a commercial version of the game, which you can purchase at Fair Play Games or Funagain Games. But you can also try out the game for free using the following rules.

At the beginning of each round, the current Judge draws one riddle-template and two nouns, and puts them together to form a riddle. If the order of the nouns matters, the Judge picks the order.

You now have two minutes to write as many entries as you’d like. Write each one on a separate piece of paper. When the timer runs out, you’re allowed to finish the entry you’re working on, but you aren’t allowed to start another one. Shuffle everyone’s entries into a face-down pile.

The Judge selects one player to read all the entries aloud. After hearing them all, the Judge picks two favorites, and the respective creators receive one point each. If the same player created both of the chosen entries, that player gets both points. Use the two nouns to track the points. After each player has been the Judge once, the game ends, and the player with the most points wins.