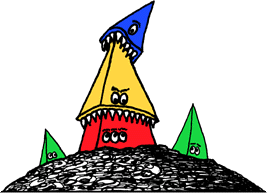 In 1962, on a quiet October afternoon in the middle of an African cornfield, a 40-pound meteorite tumbled to the earth and planted itself in a two-foot hole in the ground. It landed ten feet away from a farmer, who was busy scaring crows away from his corn and so was not on the lookout for falling meteorites. The papers reported that the pressure wave from the impact knocked him flat on his back.

What the papers failed to report was that, immediately after the impact, a tiny Martian lifeform hopped off the smoldering rock and made its way, quietly, toward the dazed farmer. The changes that overtook him during the following weeks and months were slow and subtle to the eye. It was a long while before he, or anyone else, understood what he’d become.

But that’s a different story. This is the story of that 40-pound meteorite, and the colonies of Martian microbes which lived upon it, struggling to survive on their journey through the cold depths of space between Mars and Earth. Only a strong colony—the strongest of them all—could have survived such a journey. And, no matter what planet you’re from, there’s only one way to become the strongest. It’s the ancient way; the evolutionary way. The natural way.

Each player should select a color. Set up the board as shown to the right, using four medium pieces of each color. Put the unused pieces of your color near you, creating your off-board “stash”. This stash should be visible to all players at all times during the game. Also, keep a space clear near the board in front of you, to be used as your “enzyme area”. It should also be visible to all players at all times. Select a starting player using any method desired; play moves clockwise around the board.

On your turn, do the following:

When you choose to eat, do the following:

You are also allowed to simply pass and do nothing on your turn.

Small pieces can move one space, mediums two spaces, and large pieces three spaces. You don’t have to move the maximum distance, and movement is always optional. Each step of a movement must be in one of the four orthogonal directions, and each step may be in a different direction than the last. If your piece has any pieces on top of it, they are all carried along with it, regardless of the sizes of any of the pieces. You may always move through or land on any space, regardless of what’s in that space. If there’s already a stack of pieces in the destination space, your moving piece (along with any pieces being carried by it) goes on top of that stack.

After (optionally) moving your active microbe, you may eat the piece which is directly below it. You are not allowed to eat pieces of your own color. Whenever you eat a piece, you must shrink it by exactly one size (unless its a small piece, in which case you simply remove it from the board). When you shrink a piece, the smaller piece may come from that opponent’s stash or from your own enzyme area (you may choose which). If neither of these options is available, the piece you’re trying to eat is currently “indigestible”. No matter where you choose to take the smaller piece from, you must put the larger piece somewhere in your enzyme area (see below).

You may use any size piece to eat any size piece; for instance, you may use one of your small pieces to eat a large piece (which becomes a medium piece). You are allowed to eat even when your piece has other pieces on top of it, but remember that your piece may only eat the piece which is directly below it.

Over the course of the game, you’ll evolve a growing number of “enzymes” in your enzyme area. A single enzyme is represented by a stack of one, two, or three pieces; each enzyme may only contain pieces of a single color, and at most a single piece of each size. The strength of an enzyme is determined by the number of pieces it contains. (In order to make the strength of an enzyme easy to see, always stack smaller pieces on larger pieces.) The function of an enzyme is determined by its orientation. An enzyme stack may stand upright on its base, or it may lie on its side and point towards the board, away from the board, or sideways (making a total of four possible orientations).

Whenever you shrink an opponent’s piece, you must add the larger piece to your enzyme area. You may always choose to create a new enzyme, in which case you simply place the piece in one of the four orientations. Alternatively, you may add it to one of your pre-existing enzymes of the same color (as long as that enzyme doesn’t already contain a piece of the same size). You may not change the orientation of an enzyme once it’s been created. When you shrink the piece that you’re eating, if you choose to take the smaller piece from your enzyme area rather than from the opponent’s stash, you don’t have to add the larger piece to the same enzyme that the smaller piece was just in; you can add it to any enzyme of that color (as long as there’s no size conflict), or use it to create a new enzyme. There’s no limit to the number of enzymes you’re allowed to create for a color, and you may duplicate orientations if you wish.

Spore—This action is represented by an enzyme stack that’s lying down and pointing towards yourself. Whenever you use the power of this enzyme, you’re allowed to add one, two, or three of your own small pieces to the board (based on the strength of your enzyme). You may place these pieces in any of the four spaces adjacent to the active microbe’s stack (and on top of whatever pieces are already there). When creating multiple pieces, you may distribute them in any way that you’d like, including stacked on top of each other.

Grow—This action is represented by an enzyme stack that’s standing up on its base. Whenever you use the power of this enzyme, you’re given one, two, or three units of growth (based on the strength of your enzyme). For each unit of growth, you may increase the size of any one of your pieces in the active microbe’s stack, by swapping the piece with the next-larger piece from your stash. You may use two units of growth to grow a small piece into a large one, even if you have no medium pieces available in your stash.

Attack—This action is represented by an enzyme stack that’s lying down and pointing towards the board. Whenever you use the power of this enzyme, you’re allowed to perform one, two, or three attacks (based on the size of the enzyme). For each attack, you may remove any piece from the active microbe’s stack, and return it to its owner’s stash.

Escape—This action is represented by an enzyme stack that’s lying down and pointing to either side (it doesn’t matter which). Whenever you use the power of this enzyme, you’re allowed to perform one, two, or three escapes (based on the size of the enzyme). For each escape, you may remove any one of your pieces from the active microbe’s stack, and move it to any space on the board (on top of anything that’s already there). Escaping pieces never carry other pieces on top of them. You may only escape pieces from the stack that the active microbe started in, even if the active microbe itself escapes to a different stack. You are allowed to put escaping pieces on top of the stack they escaped from.

If, at the end of any player’s turn, you have no pieces left on the board, you are eliminated from the game; all of the pieces in your enzyme area are returned to their respective stashes. The game continues until there is only one player left alive; that player is the winner. It’s possible to reach a stalemate position; in that case, all players remaining in the game share the win.

After you’ve won, you are allowed to stand up, throw your hands in the air, spin around, and shout “Zagami!” in a loud voice. This action is always optional. Of course.